My twins are now ten, which is just crazy to think about. I’m ready to shrink them back to three! But they are pretty darn excited about being double-digits and I guess I don’t have much choice in the matter.

We’ve always done joint birthday parties for the girls. (Twin mommies: do you have one or two parties? I’d love to hear!) This year we started out with a sharks and surfers theme, since those are the girls’ favorite things. But, that just felt like it needed to be a pool party, and it’s just the wrong season for the pool. So I hit on a “favorite things” theme instead and both were totally on board with taking control of their own party planning!

Here’s how we created a VERY specific favorite things party without it turning into an uncoordinated mess.

Creating a Theme Out of Thin Air

So I dubbed the party “favorite things” and a theme was born. Turning to Pinterest for inspiration was interesting because the favorite things parties I found were mainly Christmas exchange parties for moms, where everyone brings enough of one gift — their favorite thing — for each guest. I was not about to ask guests to bring their own party favors. Instead, our focus was sharing the girls’ favorites with their friends. And this twins party by Lil Hoot really encapsulated what I wanted our party to be. 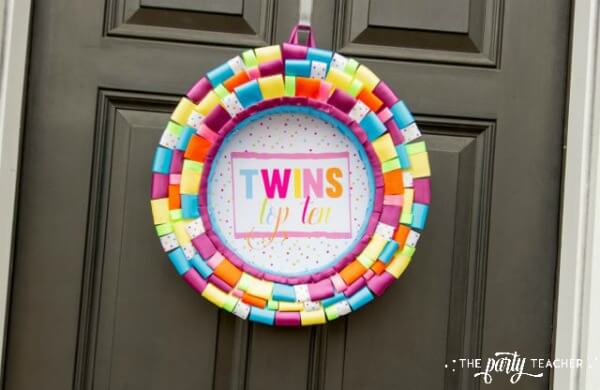 I had each girl make four lists: favorite colors, food, activities, and gifts. Commonalities between the lists narrowed down our choices. Of course, the girls disagreed on some activities, but they also understood the balance we were going for and came around. (You know, eventually. Eye rolling and sass have entered our lives. I’m really longing for year three again.)

In my search for style and cohesion, I imposed a few design choices: 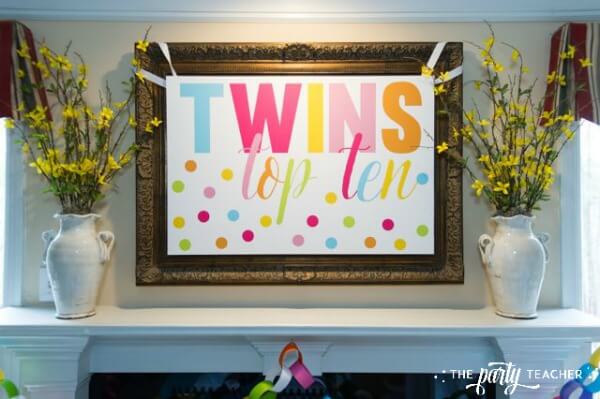 Our dinning room was the logical place for the dessert table. (I’ll show you my magical sideboard transformation in another post.)

For those of you who’ve been playing along for a while, you know that the huge mirror above my sideboard is my nemesis when it comes to parties. It’s a pain to disguise. But for this party, I think I found the solution I’ll use again and again: three WalMart curtains hung from a tension rod that’s tucked behind the top of the mirror. It’s my simplest and best solution yet.

On the morning of the party, the girls and I had fun adding circle stickers to the white curtains. Then I pinned on a Love the Day banner, and the backdrop was done — easy peasy. 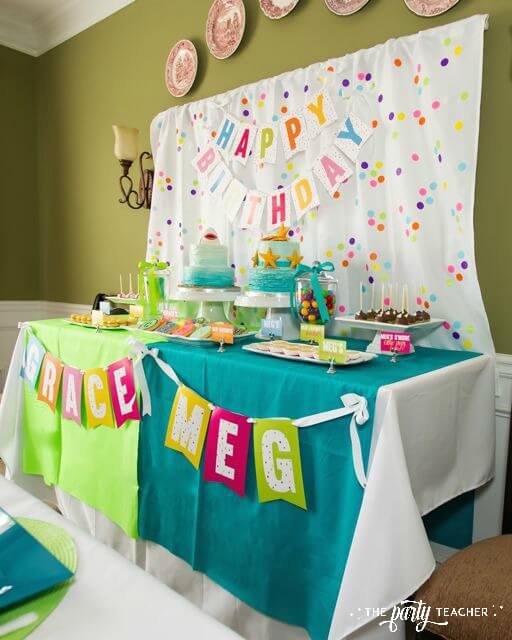 The two table runners on the sideboard are just fabric yardage. Each girl got a personalized banner on “her side” of the dessert table. 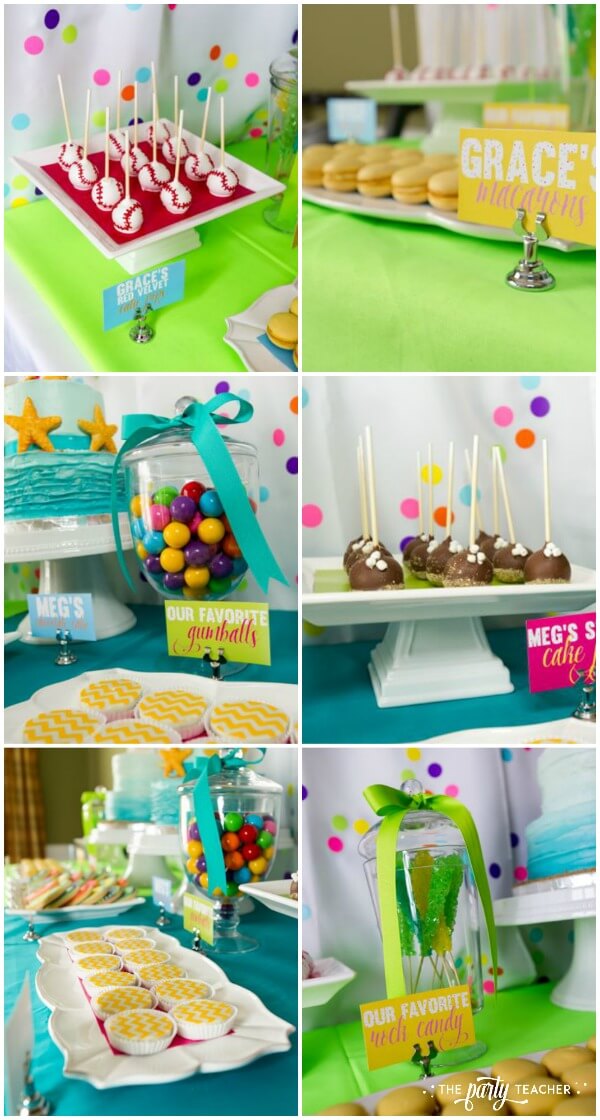 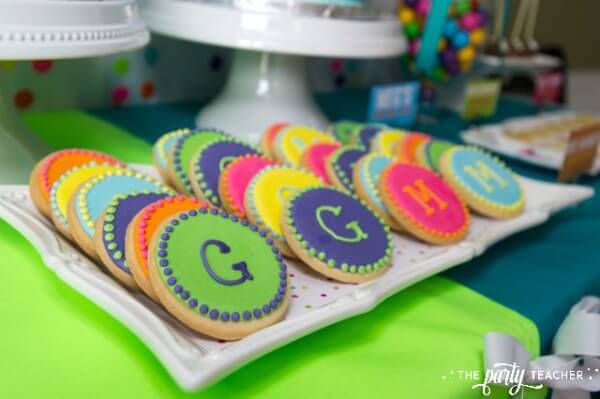 My twins have obviously seen one too many blow-out parties (for which I have only myself to blame) and the dream cakes they began to describe to me made dollar signs appear in front of my eyes. So, I turned to Pinterest and found three inspiration cakes for each girl that I thought wouldn’t be budget busters and let them pick. Sugar Sugar Cakes created both cakes for us in buttercream (since we’re not fondant lovers). I purchased cake toppers to personalize the cakes more. 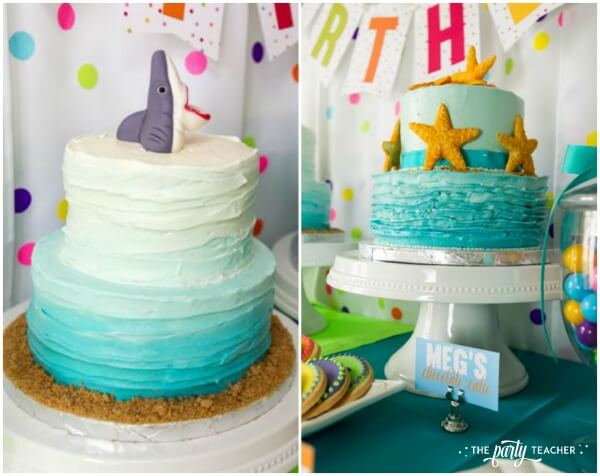 Fully extended, our dinning table seats only eight because the chairs are gigantic. But with Marius stools from Ikea, I was able to fit 12 girls around the table. 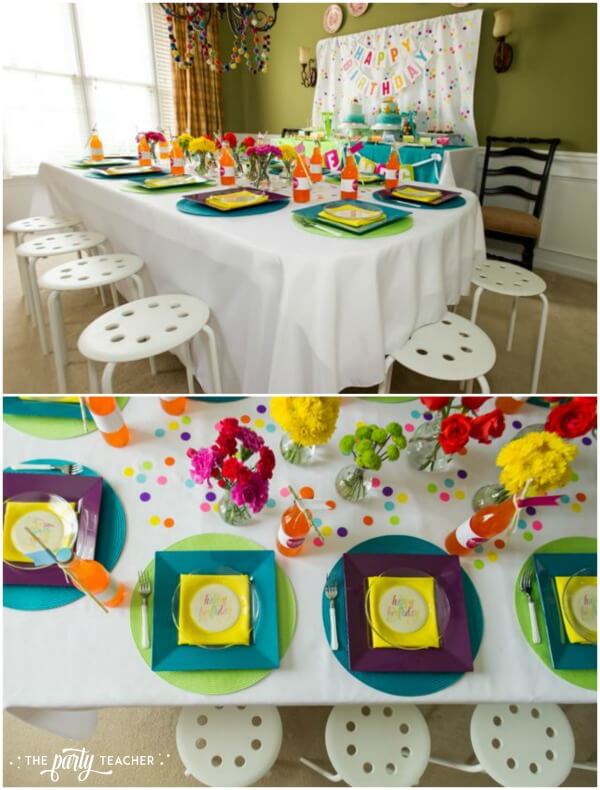 Orange Crush was the girls’ beverage of choice. Anything they chose together, I labeled “Our Favorite.”

In this photo, you can also see the mock table runner that I created out of circle stickers I found on Amazon. Our centerpieces were small arrangements of flowers, sticking with one color per vase. These are just simple grocery store flowers; no reason to spend a lot of money here! 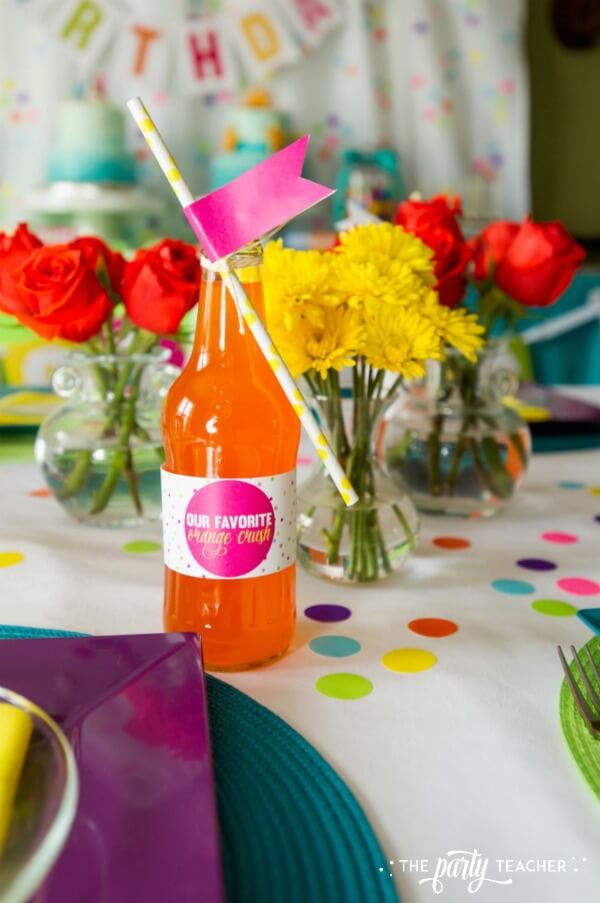 I don’t know if you can really see it well, but in person, the felt ball garland hanging from the chandelier was one of my absolute most favorite things. (I still have them hanging there!)

The place settings varied: green placemat with teal plate or teal placemat with purple plate. Both had yellow napkins topped with a glass plate by Create UR Plate. See how the Happy Birthday design on the plate perfectly matches the printables? That’s because Love the Day designed these and Create UR Plate printed them as reusable stickers on their plate-ables. I am so excited about these plates, I’m going to do a whole other post about them!! 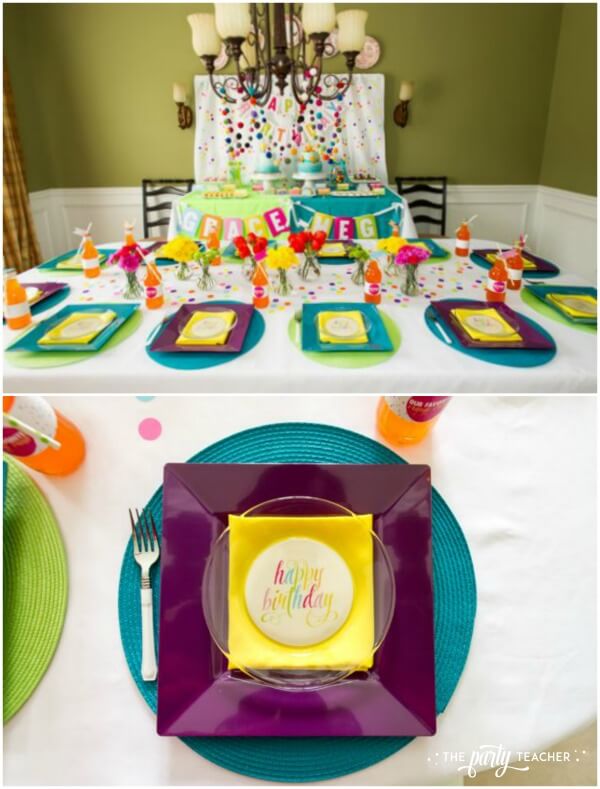 For their activities, the girls chose mani pedis, face painting, and cupcake decorating. They picked out a host of nail polishes at the dollar store and all the toppers for their cupcakes.

I also felt like they’d be happiest running around, so I suggested a Bigger, Better Scavenger Hunt. If you’ve never done this, it’s completely easy and a blast.

The party favors were most like a traditional favorite things party. We haggled over five items to give our guests, trying to keep within a certain budget, choose a variety of gifts, and get a nice mix of colors. The girls helped me decorate the favor bags and then guests loaded their own bags. They also got to keep their mani pedi flip flops, toe separators, and glitter nail files. 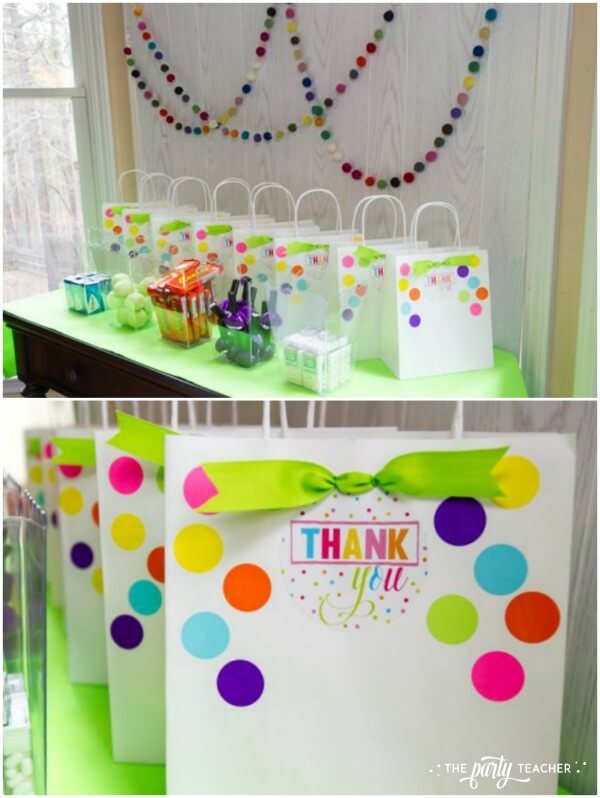 And on another note …

I can’t tell you how relieved I was to have hosted our party at home this year. Something in me just rebelled at the thought of hauling tote upon tote to an away location — even knowing I’d have help. I was really determined to make the party work at home, despite my husband’s reservations about wild children running amok. (Friend-moms, if you’re reading this: everyone was very well-behaved.)

Thank goodness I listened to my instinct. If you follow me on social media, you know that my sweet dad’s health took another turn at the end of January. The night before the party, we got word that he has pneumonia. The absolute last thing I wanted to do at that point was finish everything that needed finishing for the party. My online party girls started praying and my local friends jumped in. HUGE THANK YOU TO YOU ALL. We actually pulled it all off because I’d been able to do so much set-up and testing early. The day of the party really went surprisingly smoothly, and the next day I got to visit my dad, who is still ill, but getting stronger.

A simpler party, a party at home, being able to take the time to focus on family — it made all the difference this year. Listen to your inner voice. Ask for help. Have fun, and keep putting family first.