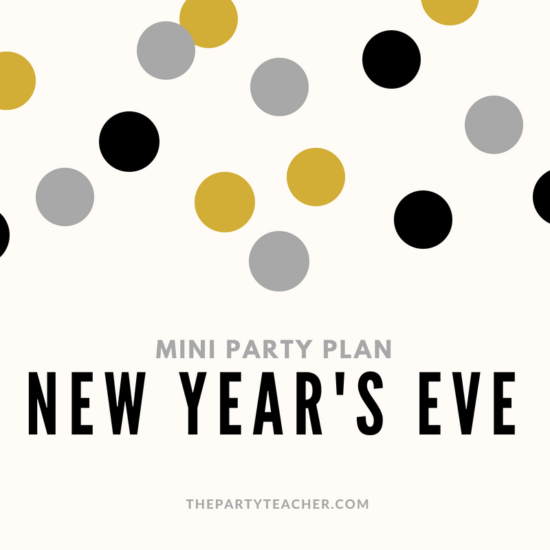 I started planning my New Year’s Eve party with a mood board. For me, creating a mood board is just another way of brainstorming. So that this party would be easy for you to take and customize, I kept to a traditional New Year’s Eve palette of gold, silver, and black. I also tired to keep my choices sleek and modern. 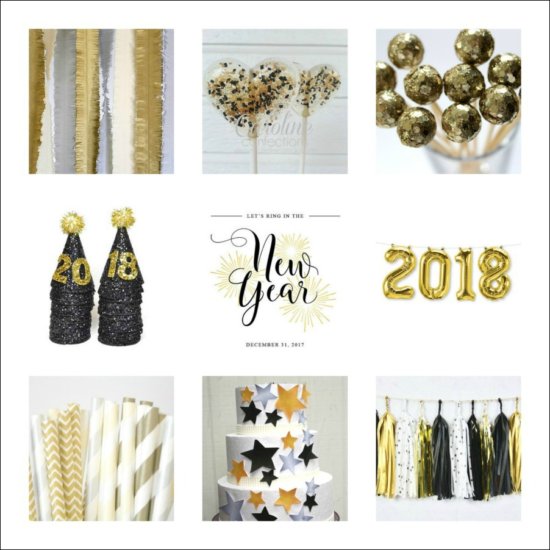 Your first step is to make your guest list. Will you have a party just for your family? Or will you invite friends and neighbors? (For ideas on how to host a budget-friendly New Year’s Eve block party, see this post.) This year, it will be just the four of us for New Year’s Eve. But that’s no reason not to party a little! Our girls are old enough to stay up to midnight … and will probably be more successful than I will at staying up that late!

If you will invite others, you’ll want to pick an invitation. Here are a few of my favorite invitations for a New Year’s Eve party that includes kids. 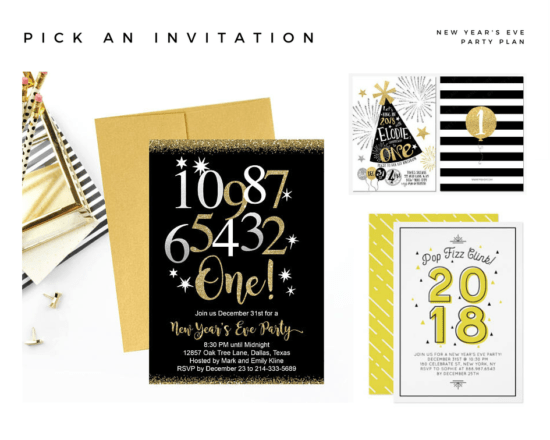 Let’s assume your party will be 8 p.m. to midnight. You can skip serving dinner, but that’s a long party and your guests will need to nosh. You’ll want to serve heavy appetizers and a variety of desserts. You also may want to think about a kids’ buffet and an adults’ buffet. Not that you’ll police them, but think kid-friendly, simple foods like ham biscuits or mini pizzas. (I’ve got more tips about New Year’s Eve party appetizers here.) 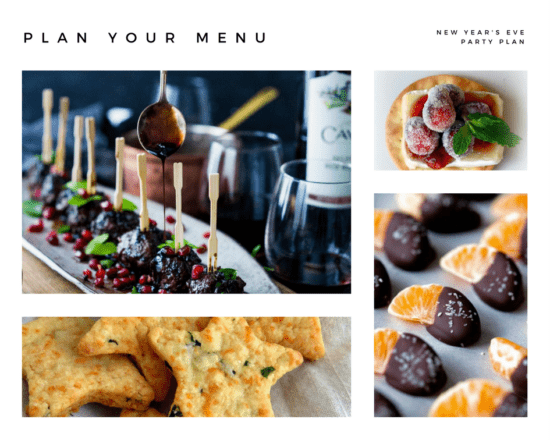 On your dessert table, you’ll want to serve a mix of baked sweets and candy. Candy = one less thing you have to make. Baked sweets can either be purchased or homemade — or both. Since this party is for New Year’s Eve, see if you can work in some edible glitter or other touch of gold. (Want to learn more about planning a styling a dessert table? Jump to my Dessert Tables 101 series.)

If you want to order sweets from an Etsy seller, order now — these folks are booking up fast, and who could blame them for taking off some time around the holidays? (Once again, I have more ideas on my New Year’s Eve Party Ideas Pinterest board.) 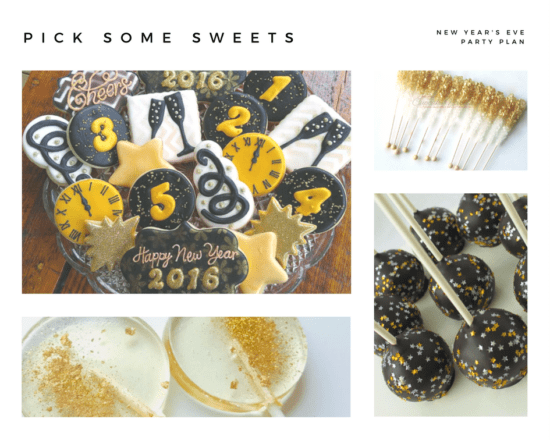 New Year’s Eve comes at such a crazy time in the calendar — who has time to plan something elaborate? I don’t. I’m going to pretty up my dessert table and call it a party. So let’s start with picking a party backdrop. I’ve narrowed down your options to gold balloons (they can spell out 2018 or whatever you like), party fans, tissue fringe, or a full on gold dot backdrop. (Baby not included.) Don’t overthink this: just pick one and move on to the next choice. 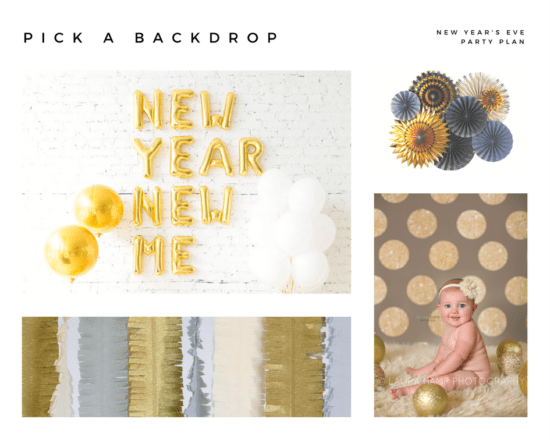 Drape a garland across the front of your party table, and maybe another across your backdrop. So, pick one or two garlands. Go for a little contrast: if your backdrop is mainly gold, chose a garland with black and white so it will pop. No time to order? Try the Target dollar spot — they have lots of cute New Year’s Eve decor in stores right now. 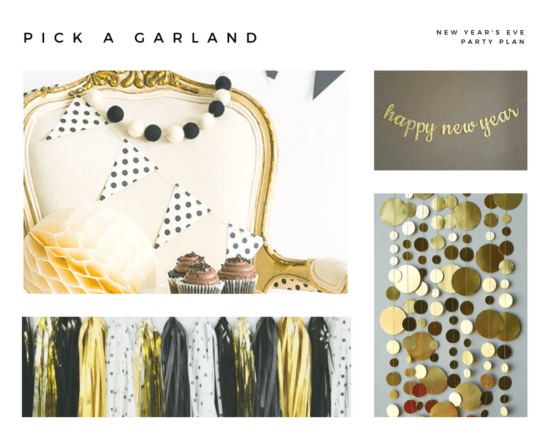 When I think about embellishments, I think about all the little decor touches that can pull your dessert table together. Things like swizzle sticks that look like a New Year’s ball drop or popcorn boxes (for staying up watching movies) or gold straws or a sparkly cake topper. If you go to buy one of these items and find it’s sold out, Etsy will probably suggest a similar item from a different shop. 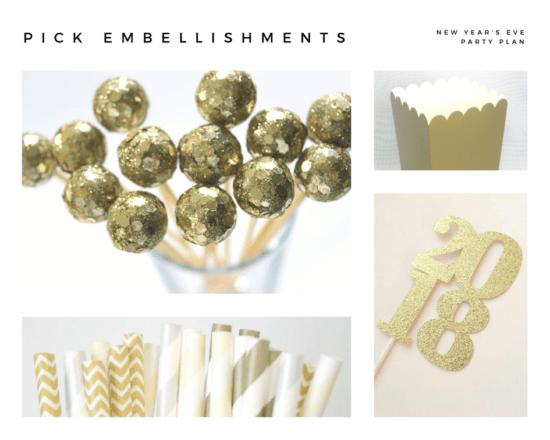 I’ve picked tableware with the idea that your guests won’t be sitting down to a meal. Instead, they’ll be standing and nibbling. So, think dessert plates and cocktail napkins, rather that full size items for a sit-down dinner. All these items are from Target. To save time — and save on shipping — order as much as you can from one resource. With tableware, all I want you to do is chose of mix of gold, black and white. 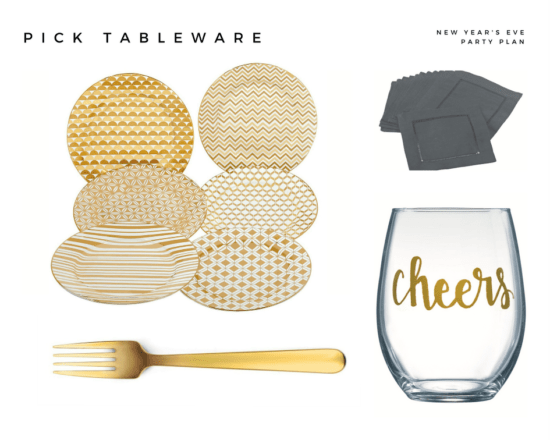 For my party, I chose hats from Etsy, and of course, right after that, I saw plenty of cute (not garish) paper hats in the Target dollar spot. I love supporting handmade, but see if you can save yourself a few dollars on party hats! 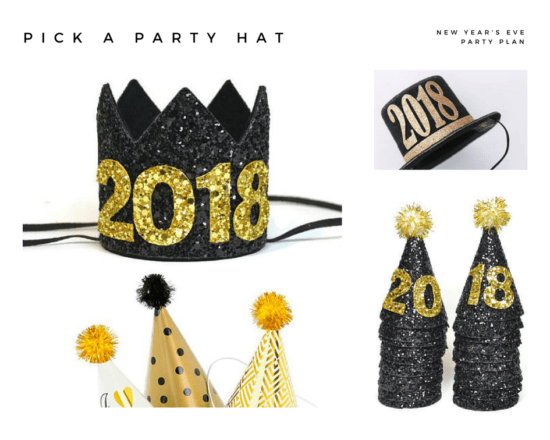 If you’re having adults at your party, music, food and your typical midnight activities will take care of your party fun. But, if you’re inviting kids — or just trying to keep your own kids busy til midnight, you’ll want to think about other party activities. Think about one planned per hour of party. Here are some ideas.

Activities during the party

At midnight, make sure you… 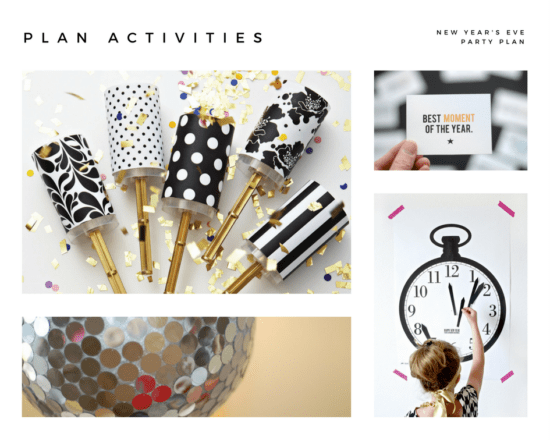 We’re going to have a New Year’s Eve movie night. Even if you have activities planned, I’d recommend having some movies on backup. Tired kids need some down-time from active fun and crafty fun. Here’s a list of kid-friendly classics with a New Year’s Eve theme. You can alway check how appropriate a movie may be by age at Common Sense Media. 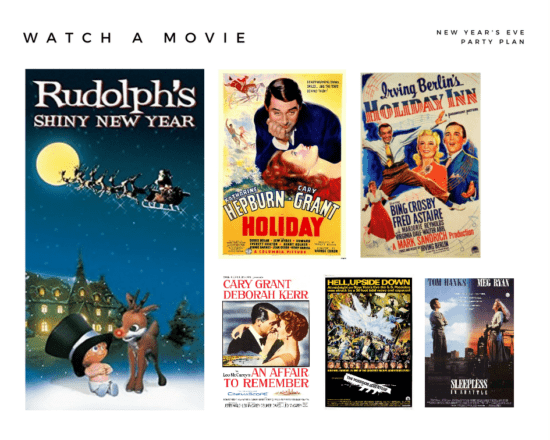 After the kids go to bed (if you are still awake) try these:

Do you have to offer a party favor for a non-birthday party? Nope. But it can be fun and inexpensive to put something together. 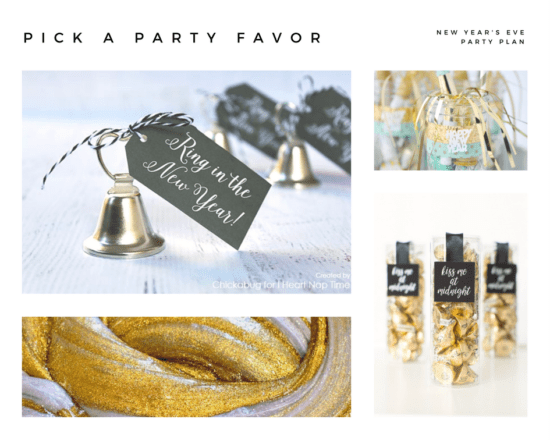 Need more ideas? How about …

I hope these ideas help you QUICKLY pull together a New Year’s Eve celebration of your own. Please let me know what you’re planning in the comments below. And, Happy New Year!