I first created this Charlie Brown Thanksgiving Party for my daughters’ preschool class when they were four. It was really fun to dust it off, amp it up, and host it again for some of the same kids now that they’re six. 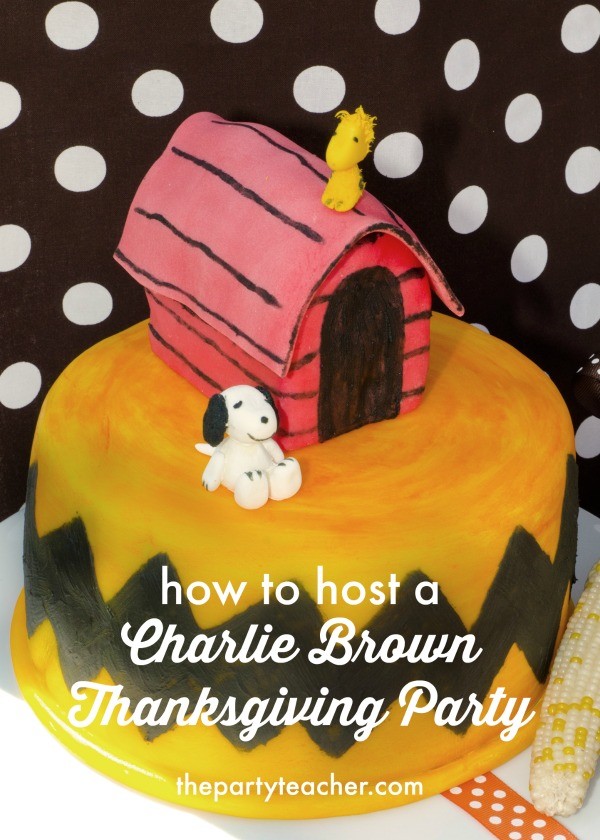 Want to make this party part of your Thanksgiving? The Charlie Brown Thanksgiving Party Plan is available now in my shop! 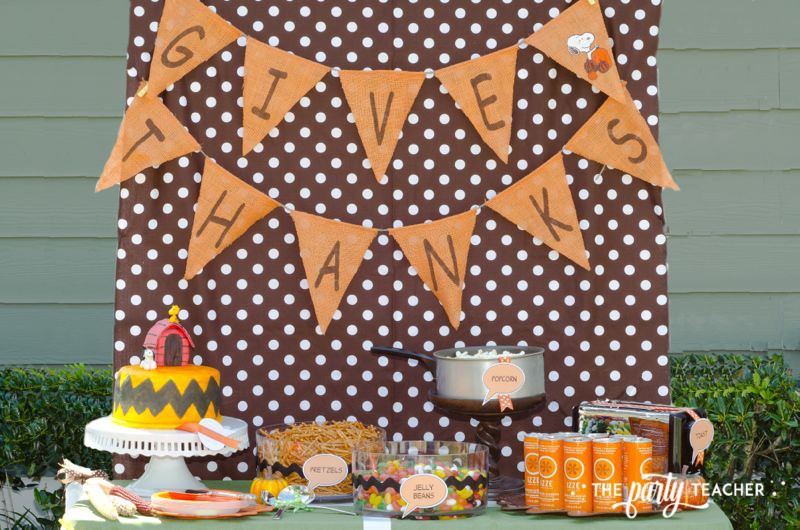 The Charlie Brown Thanksgiving Special first debuted on TV when I was three, so I grew up watching it and getting so excited about the once-a-year showing. I love seeing my girls fall in love with it, too!

So, I decided to re-create Charlie Brown’s Thanksgiving. I started with a color palette inspired by Charlie’s yellow shirt, and added pops of fall color: orange, brown and a little green. Tying it all together were polka dots. 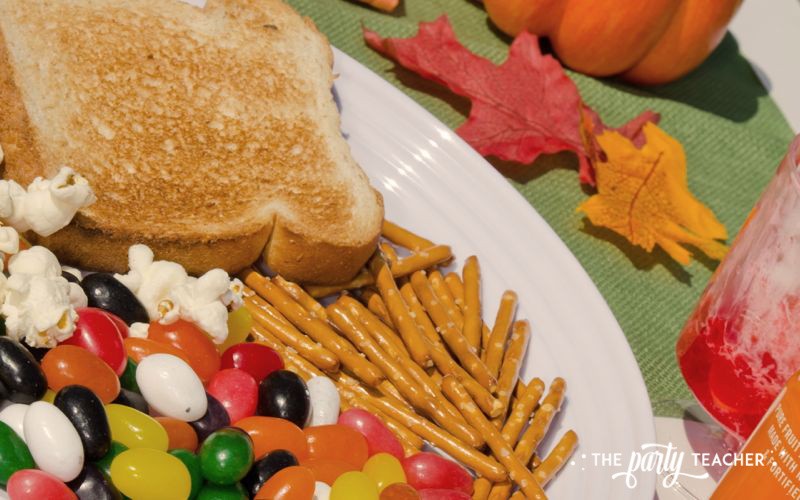 Instead of using Etsy-bought printables, I found a vintage book based on the special. I used the book’s illustrations to create invitations, Silly String wrappers, and favor box toppers. Using Word, I made word balloons with an orange background for labels. The party plan gives you all the tutorials and templates that you can fill in with your own text. 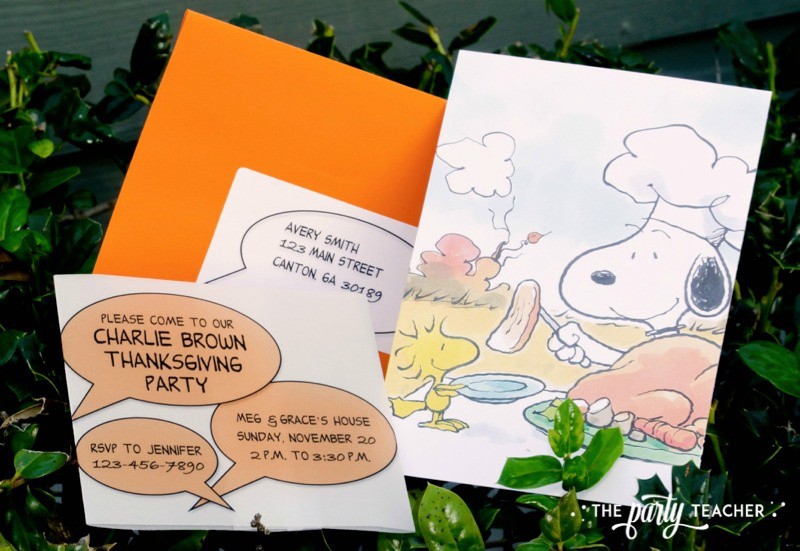 I didn’t have a ping-pong table, but it was easy to mimic that look with green tablecloths and white Duck Tape (love that stuff!). Surrounding the table, we used mismatched chairs, just like the special. I have to say that Snoopy has more napkin-folding talent than I do!

Down the center of the table, I placed our costume pails and name-drawing pails — more on our activities in a minute. 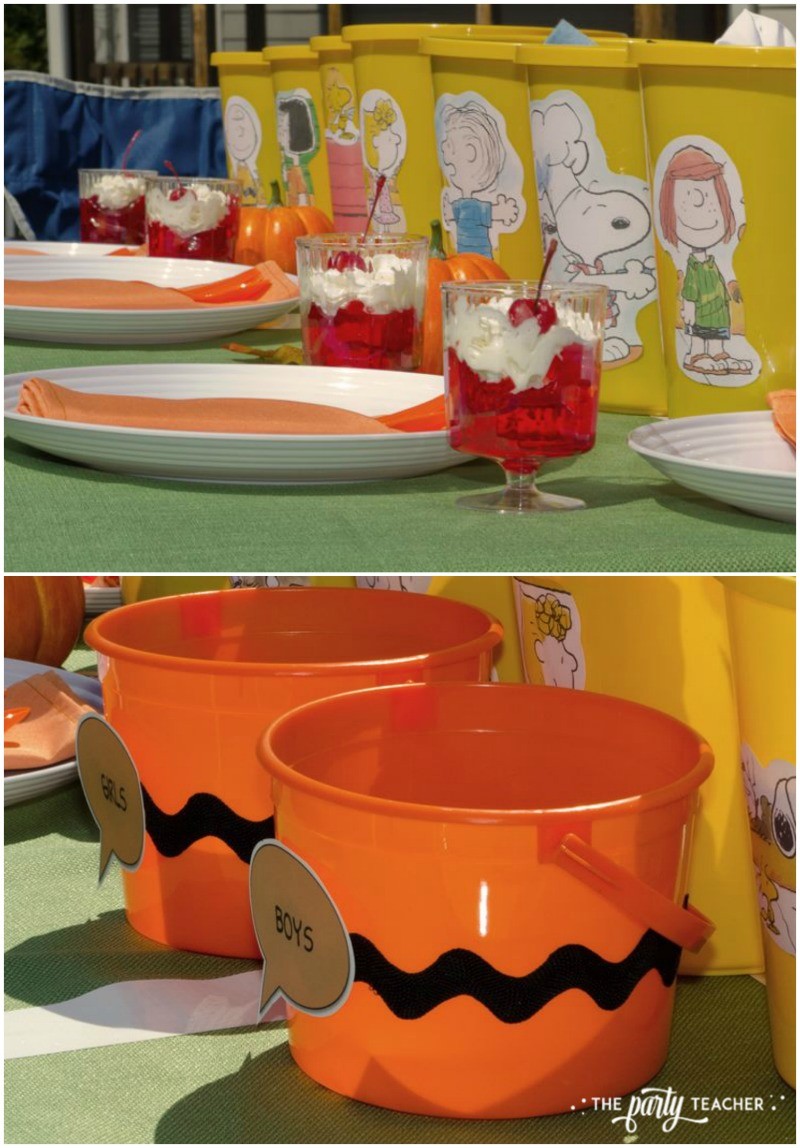 For food, we made Linus’ menu of popcorn, pretzels, jellybeans, toast and mystery parfaits. (I decided that strawberry Jell-O cubes, whipped cream and a cherry on top was pretty close.) Of course, I couldn’t resist adding a cake. I love the Snoopy and Woodstock figurines and doghouse topping Charlie’s shirt. 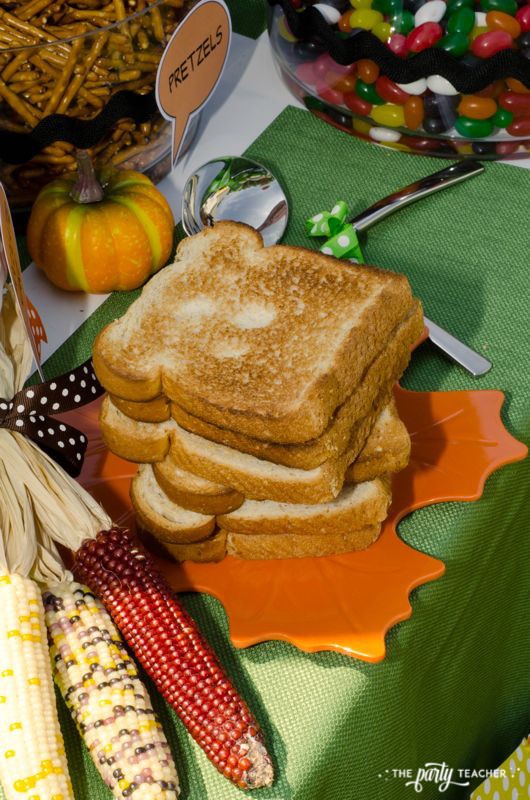 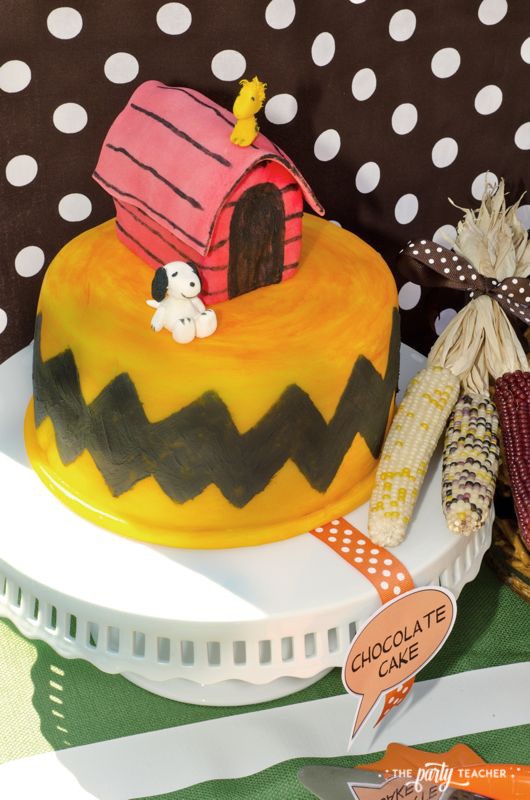 Decorating with touches from the special was a blast. I shopped Goodwill, and was able to add: 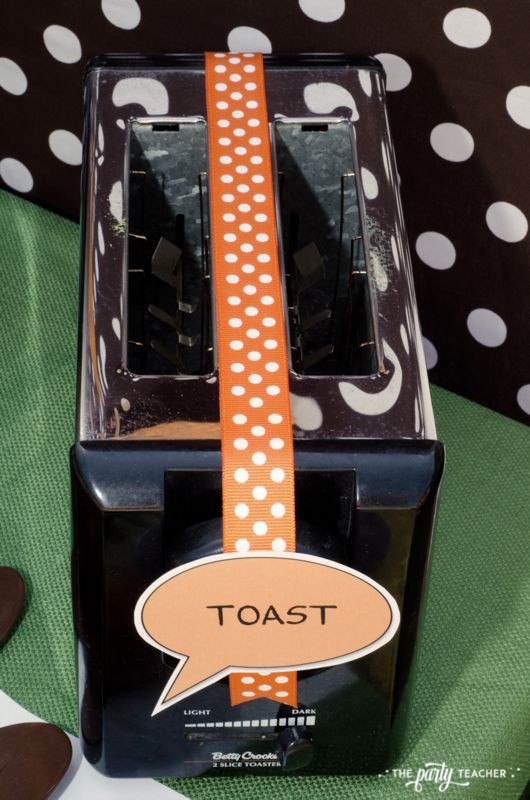 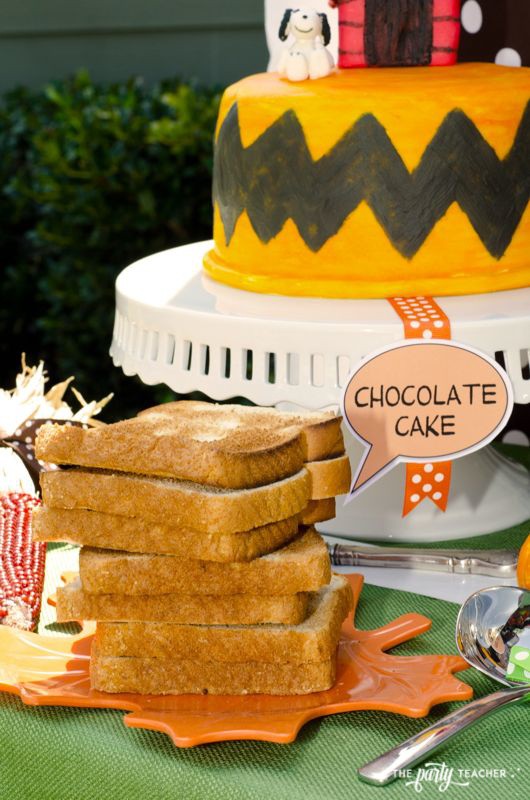 For our party craft, each child drew a character’s name from a pail. Then they made a “costume” by crafting a t-shirt to look like their character. Each pail had all the supplies each guest needed, plus an image of the character glued to the pail so they understood the look. 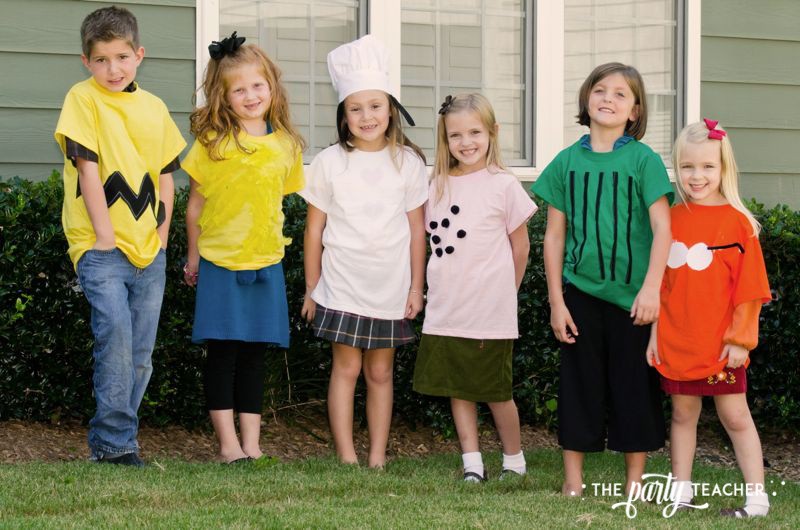 After snacks and cake, we played games. First up was a sack race, followed by football. (And yes, we pulled the football away from Charlie Brown – with warning!) Finally, we played Silly String, which was a huge hit. 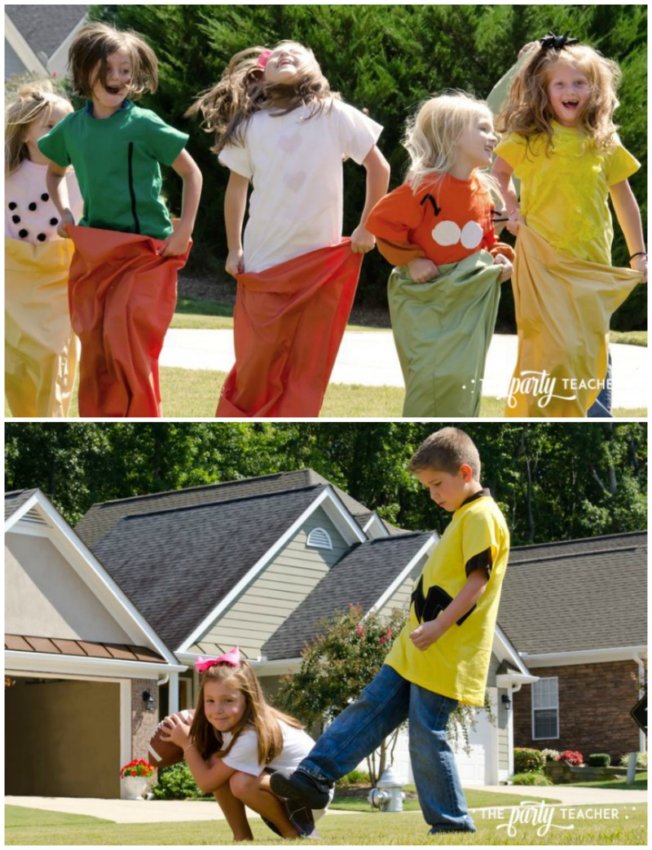 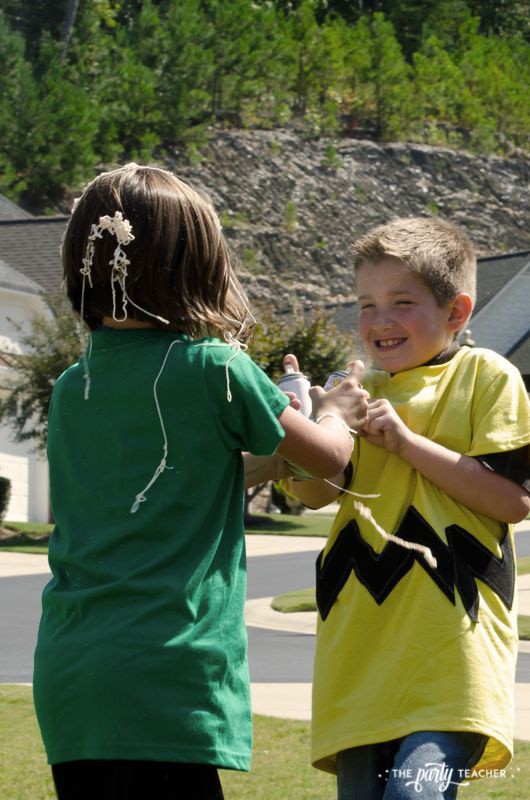 Each child took home his or her t-shirt craft, plus a favor. Inside the favor boxes were gumballs in our colors, and a plush Peanuts character clip-on. 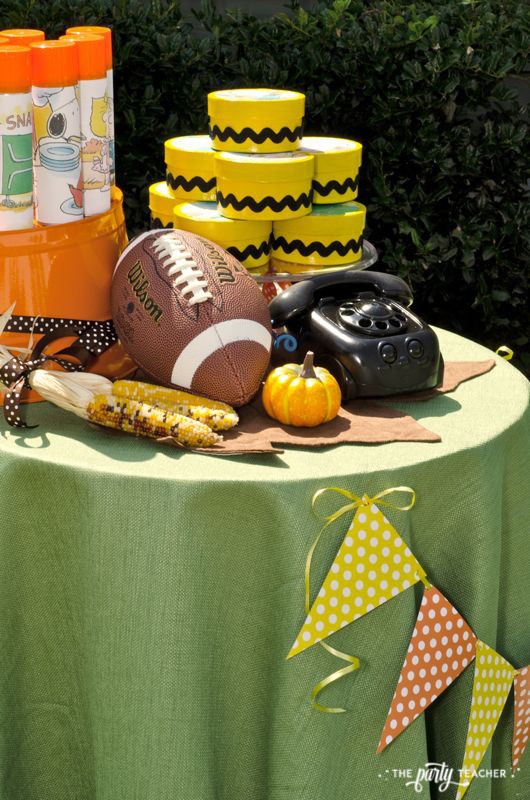 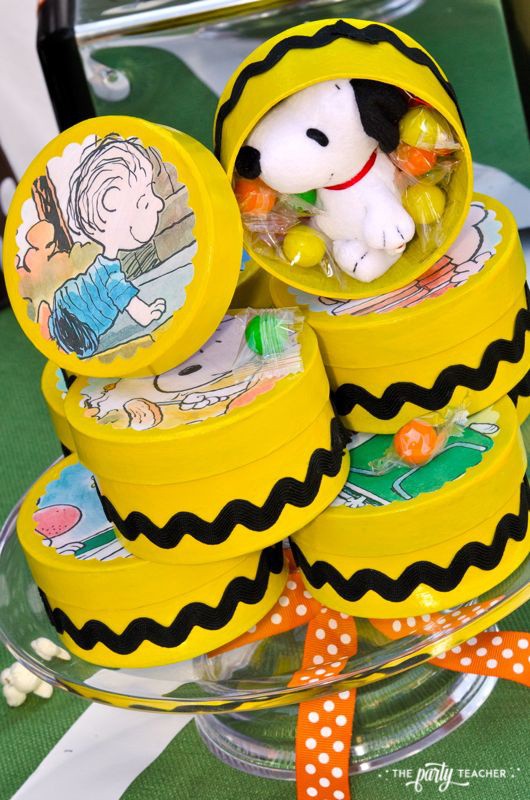 The party works indoors, too!

The kids had so much fun. In Atlanta, our weather is often very mild as late as Thanksgiving. If you have good weather in late fall, staging this party outdoors might be a fun way to do a kids’ table at your Thanksgiving dinner. I’ve also done it as an indoor picnic, and it was just as much fun, only with less running around games and more crafting activities.

Want to create your own Charlie Brown Thanksgiving Party? Visit my shop and grab the party plan that will make your life way easier! 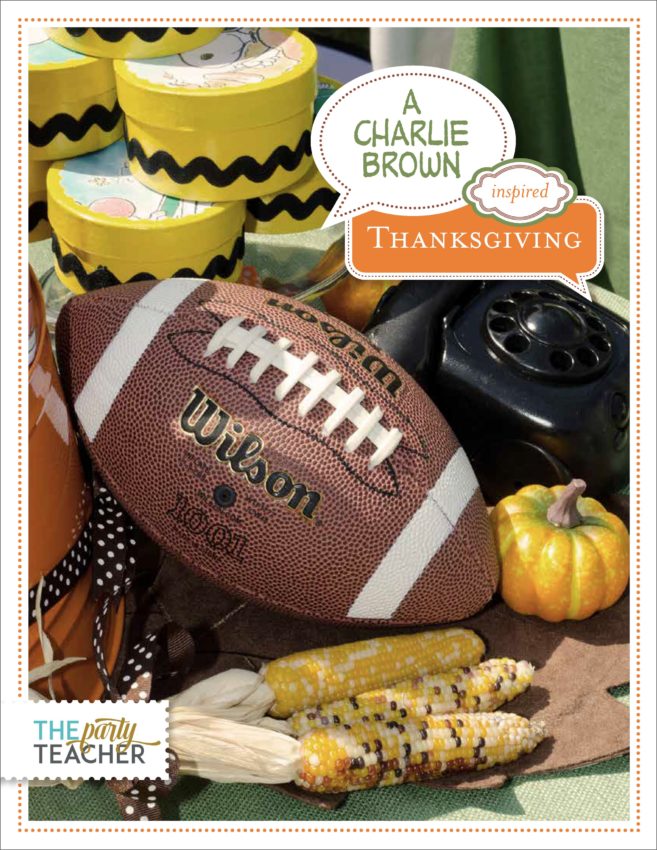