Some days, your inbox just makes you happy. Kristen of Paige Simple Studio sent me her son’s nautical first birthday party, and it was a happy day! Love the colors, love the pinwheels, love the serving trays, and LOVE the back drop!

Kristen’s son  Chase, was 10 days late when he was born. She says, “So, I was literally sitting around for 10 days with not much to do while we ‘patiently’ waited for him to arrive. Since I’m a planner by nature I decided to start planning his 1st birthday. Yes, you read that right; I started planning his birthday before he was even here!” OK. I have started planning the girls’ next birthday the day after their last party, but Kristen takes the cake! 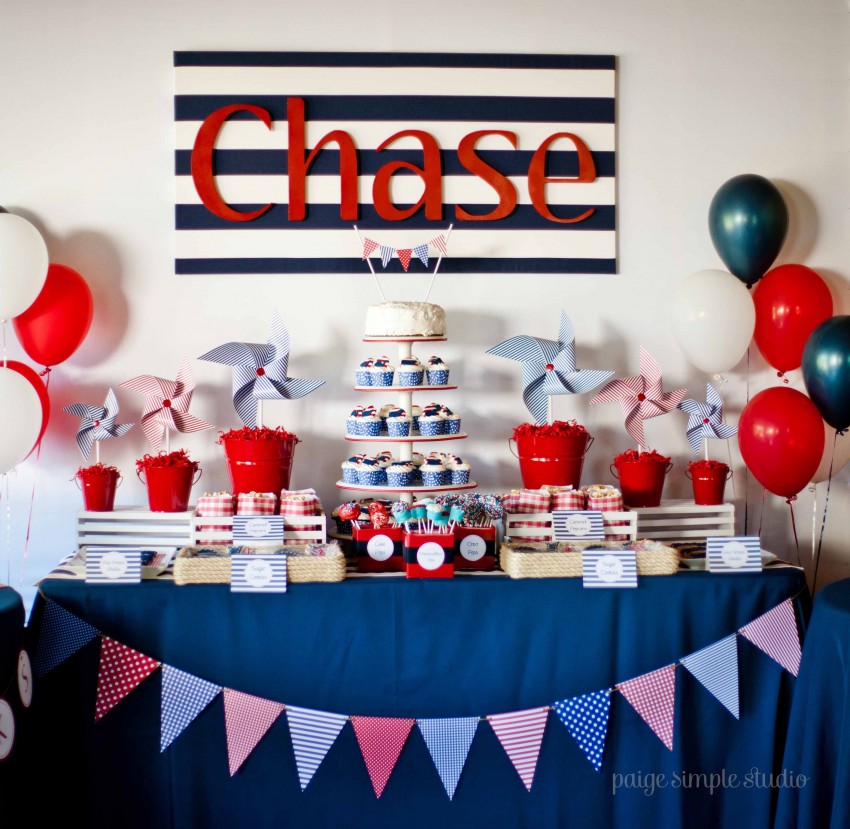 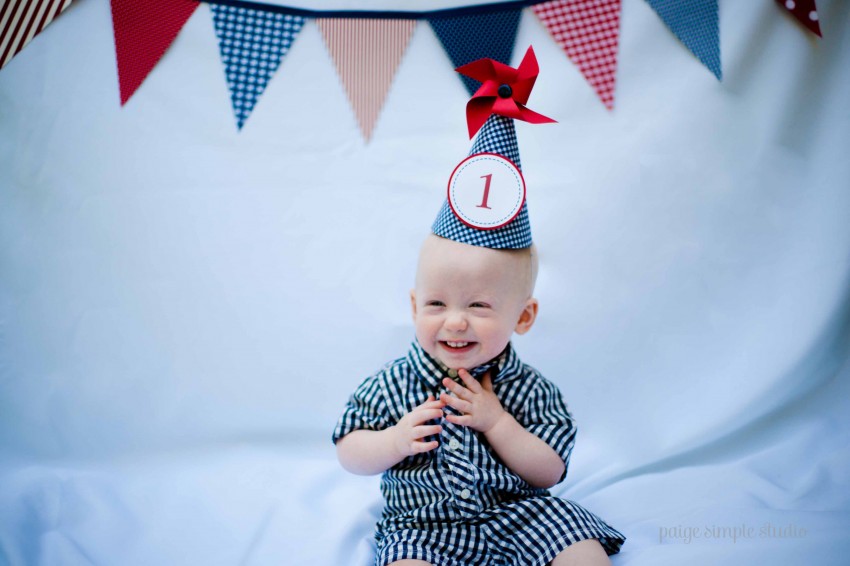 Kristen says, “This party was a labor of love for my son who turned one on June 25. Everything was meticulously planned out from the invitations, which I custom made, to the rope covered serving tray that held the cookies that matched the invitations perfectly. It was a family affair, with baked goods from my sister and sewing projects courtesy of my mother.” 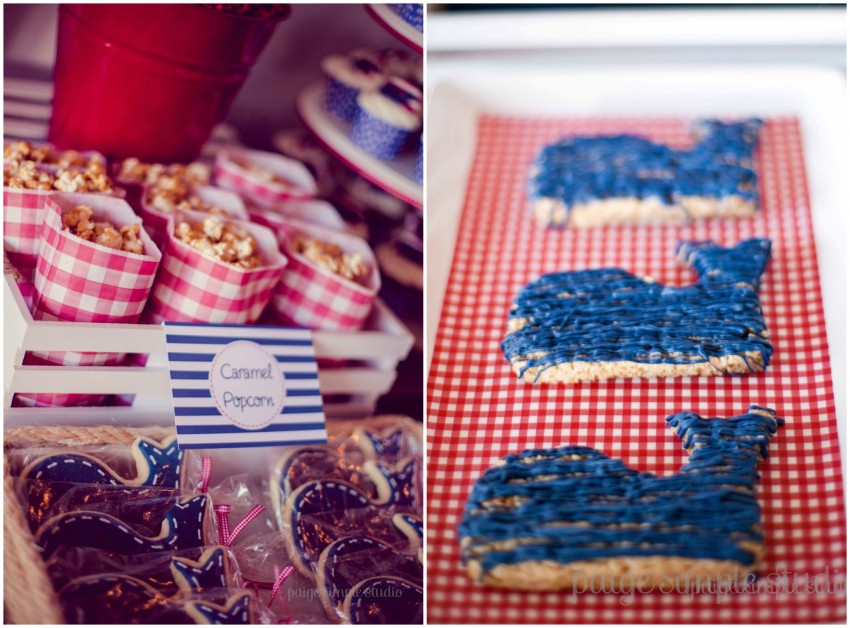 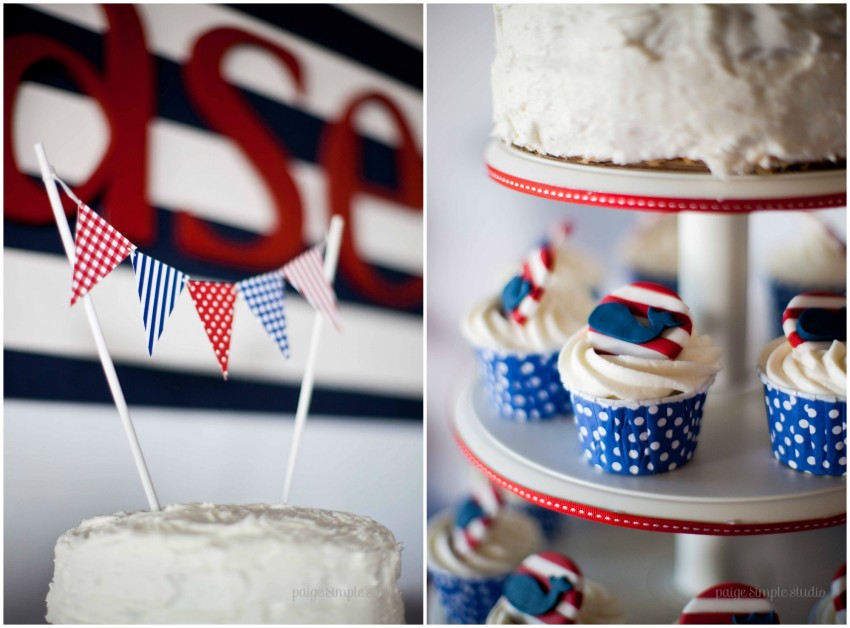 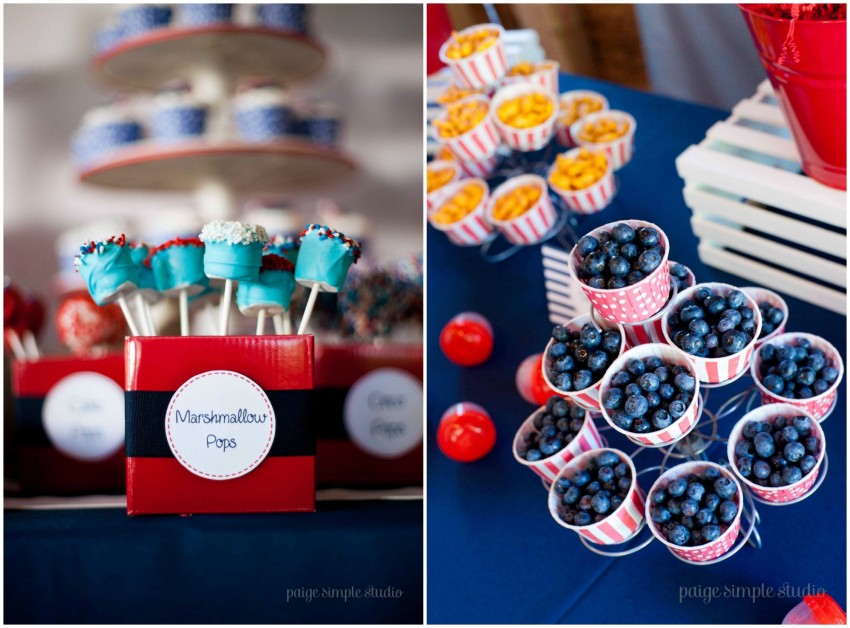 I always say, “use what you have” and Kristen already owned a collection of red outdoor partyware, so she decided that red had to be incorporated into this party. The whale inspiration came from a Pottery Barn Kids bedding collection. The stripe, gingham and polka dot patterns were inspired by pennant bunting from Etsy. Many other details were found on Pinterest! (For example, the homemade bubble containers that were originally posted by Hostess with the Mostess here.) 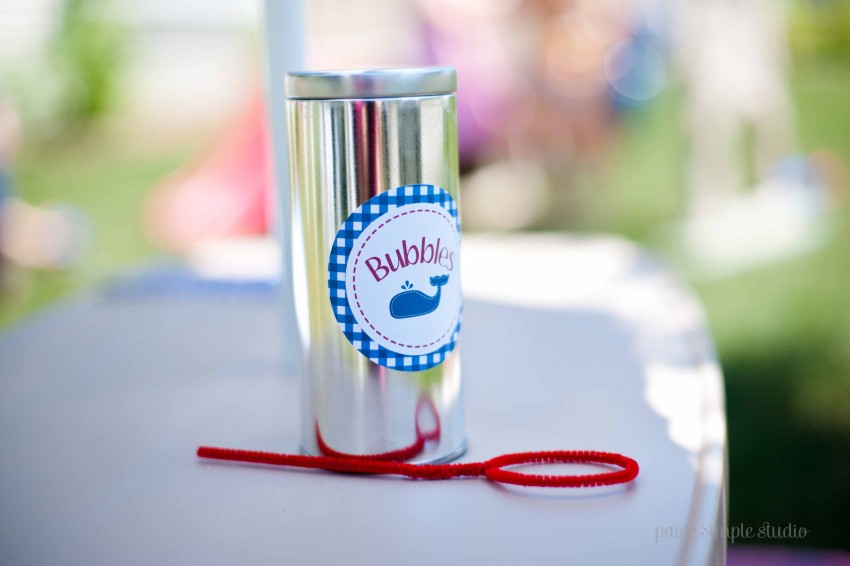 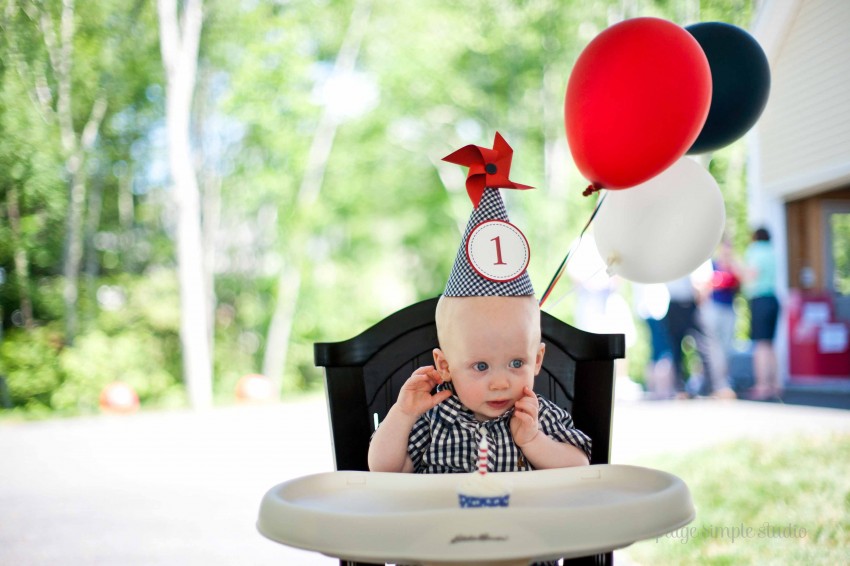 Like how the Target dollar aisle pail reads “straws”? Kristen had Victory Decal make vinyl labels for her — great idea! 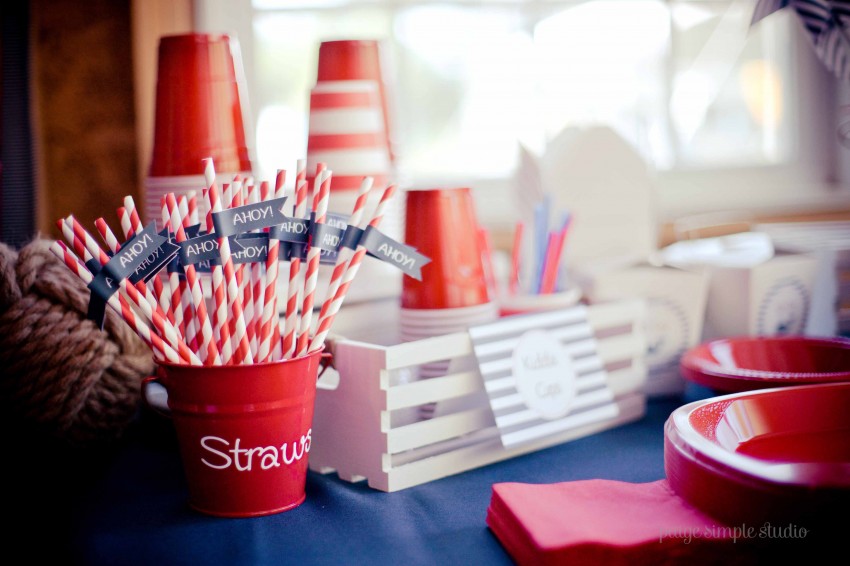 The red chair wraps were designed to make the chairs look like a life preserver — very clever. The red fabric is from Joann Fabric and was cut into strips that are 1/3 the width of the chair. Kristen wrapped the strips around the chairs and held them together with sticky back Velcro, but here’s a tip: she says if she’d had more time, she would have sewn them together or used snaps. The Velcro didn’t work very well. 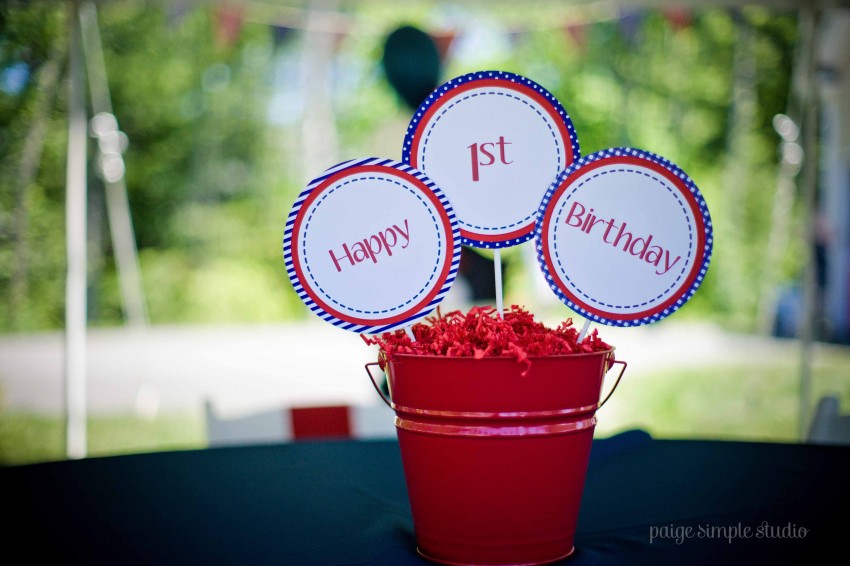 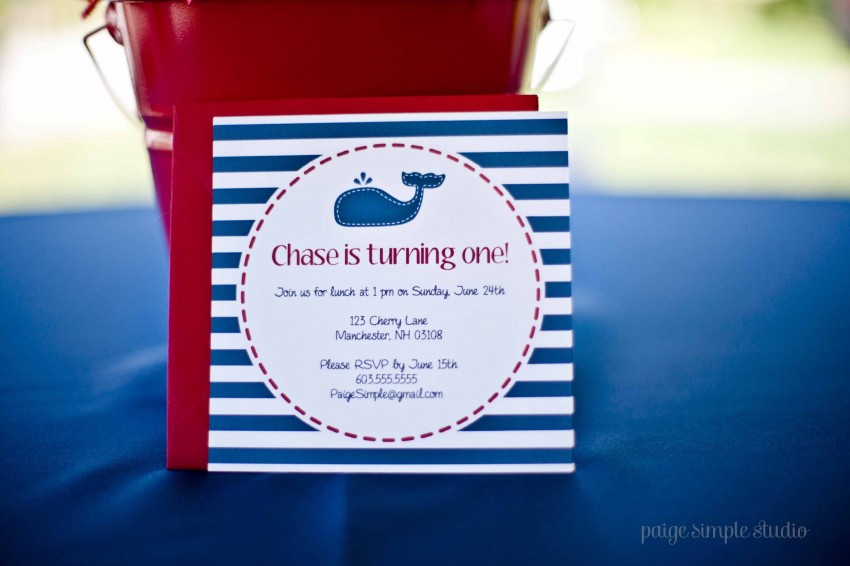 The life preserver was purchased at Pottery Barn Kids, and Kristen made the “Welcome Aboard’ sign. She had a plaque that she wasn’t using so she spray painted it navy blue and then purchased a custom vinyl decal from Victory Decals in the font that was used on the invitations. She adhered the sign to the life preserver with 3M Command Strips. The backdrop is a navy and white striped sheet from Target. 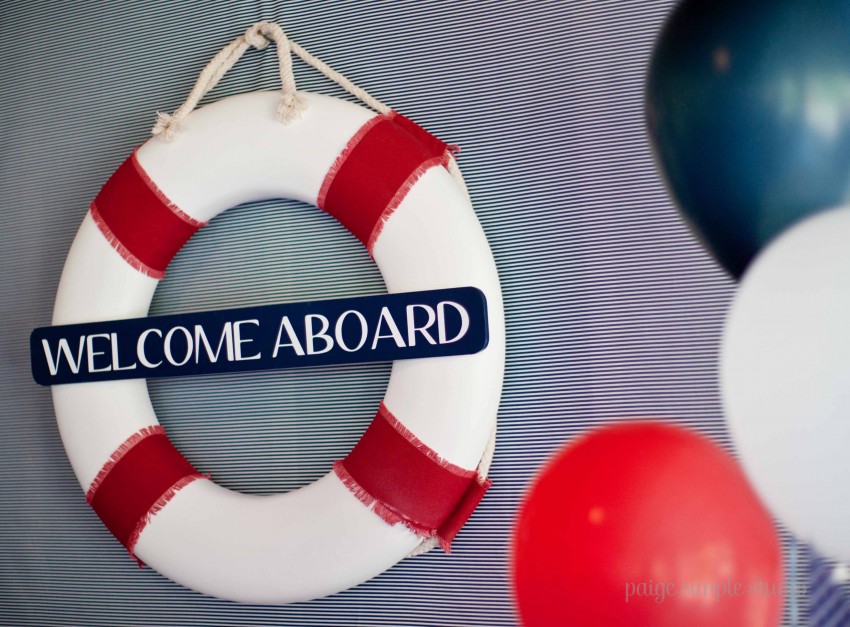 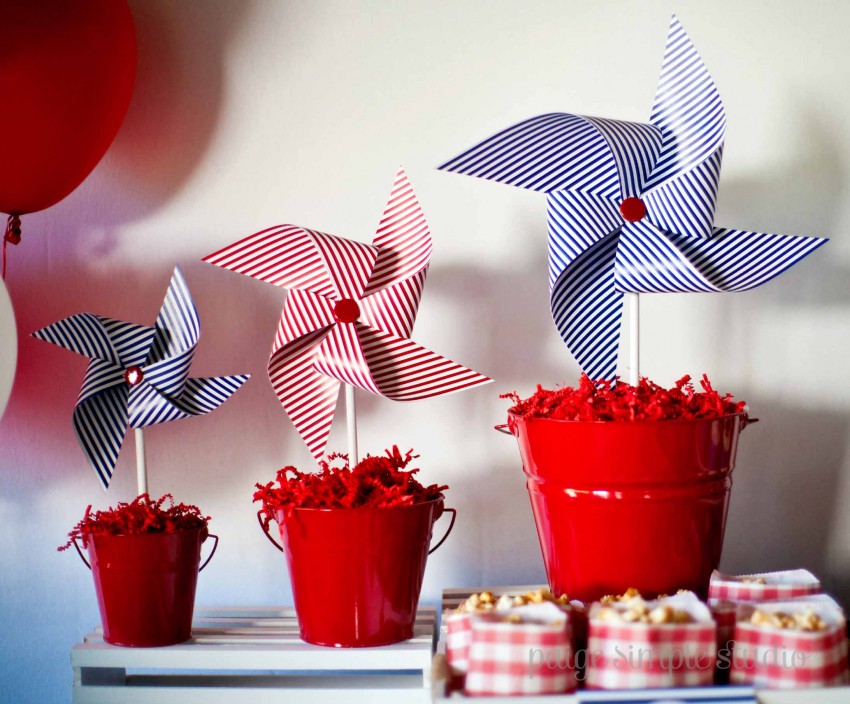 Kristen and her mom made the birthday boy party hat. It’s a basic party hat that has been wrapped in fabric from Fabric.com. Just take the hat apart and use it as a stencil. Trace the shape onto fabric, cut out the shape, adhere the fabric to the hat, and put the hat back together. The pinwheel and ’1′ sign were made by Kristen. The red scrapbook paper and brad are from Michaels. Love this: Kristen couldn’t find a navy blue brad so she painted a white one with nail polish (yes, nail polish!). 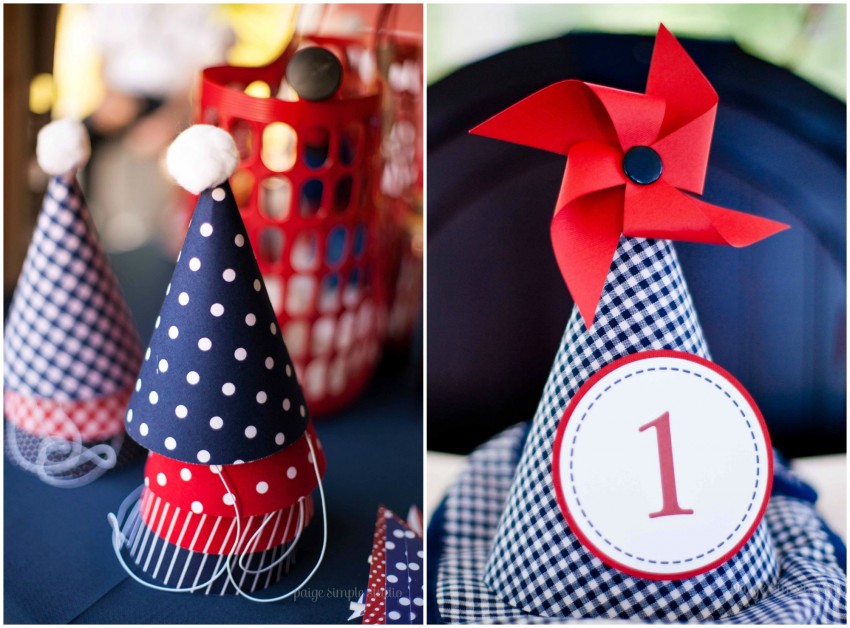 Kristen’s favorite element of this party was the ‘1st Year’ Book that she created for Chase through Shutterfly. She made a photo book with pictures of her son throughout his first year and had guests sign the book, just like you would do for a school yearbook. Kristen says, “I’m planning on doing one every year going forward and then giving them to him when he leaves the nest.” What a great idea!


‘Chase’ Letters: Say It With Letters